During my time as a Pilates instructor, I have twice had clients who had an attack of vertigo during class. It’s a most unpleasant experience for the sufferer – sudden onset of extreme dizziness, often accompanied by nausea. The first time it happened in one of my classes, I was fortunate that another client from a medical background recognised what was happening and we took the right steps to make the person more comfortable. The second time, unfortunately, I only discovered afterwards what had happened.

Apparently, about one in 10 of us will get vertigo in any given year, and I am now in that group. As I turned to roll to one side in bed on a Saturday morning, I heard myself shriek! I felt like the bed was on at 45° angle and I was clinging on. I felt about to slide off. When I computed that mattress was actually flat, I noticed that my eyes were spinning, they couldn’t stay in one spot. For about a minute I stayed like that. And then I slowly sat upright. Gazing out the window amazed at what I had just sensed. That’s when I started to feel nausea.

It seemed to have passed. I got up, unloaded dishwasher as I prepared my breakfast. I was looking forward to getting my hair cut late that morning.

But the bending and reaching (as one does in the kitchen),  started it off again: the dizziness the nausea and retching. Being someone who pushes herself, I struggled to get on top of it. I set off in the car late for my hair appointment. But quickly realised it wasn’t safe and I just about made it home.

So my Saturday ended up being one where I lay still trying to avoid dizziness and nausea. As I read around the topic, I realised that getting up is better than bed rest. I was also happy to learn that the vast majority of cases get better without treatment.

It appears I had Benign Paroxysmal Positional Vertigo (BPPV), a mechanical problem of the inner ear. We have crystals inside the inner-ear balance organs that move when we do, but if the signals lag behind those emitted from the eyes and limbs, it creates an illusion of movement. In vertigo, the inner-ear signals cause jerky, uncoordinated eye movements, known as nystagmus, which conflict with the brain’s other movement signals. The repeated attacks usually last less than 30 seconds, and are precipitated by head movements including rolling over in bed or looking up.

On Sunday, I was up and about with the feeling that I was on a boat. But I went for a walk and began to feel more balanced.  I’m being careful with head movements, slow and measured. I’m doing some recommended eye retraining moves. I’m grand, I think! But, hey, nothing like experiencing something in your own body to understand what others may feel. 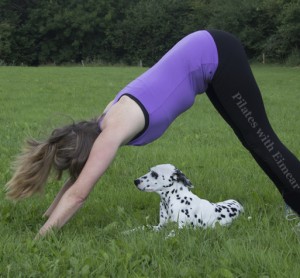 I’ve been doing Pilates with Eimear for one year now (recommended by a physiotherapist) and my back is stronger and more flexible, I’m more toned in general and I can see the progress I’m making over time which I like. I highly recommend Eimear’s classes.